The River Deveron is situated in North-east Scotland within the counties of Aberdeenshire and Moray and has an overall catchment area of 1266 km² and a length of 96kms (61 miles).  The Deveron is a prolific salmon, sea trout and brown trout fishery and holds the record for the heaviest fly caught salmon in the United Kingdom.

The Deveron has a well-deserved reputation as top class salmon river, with runs of spring, summer and often prolific runs of autumn salmon through to its season’s end. It is a river of big fish and each season brings in some fish in the 30lbs (13.6Kg) class. The Deveron has the fifth highest salmon and sea trout rod catch in Scotland and currently holds the record for the heaviest UK fly caught salmon, weighing 61lbs (27.6Kg) and caught by Mrs. Clementina “Tiny” Morison on 21st October 1924. The Deveron is also well known for high quality wild brown trout fishing and the river regularly produces specimens of over 5 lbs (2.26Kg).

The Deveron salmon and sea trout season is open and closes on 31st October and the brown trout season runs until the 6th of October. 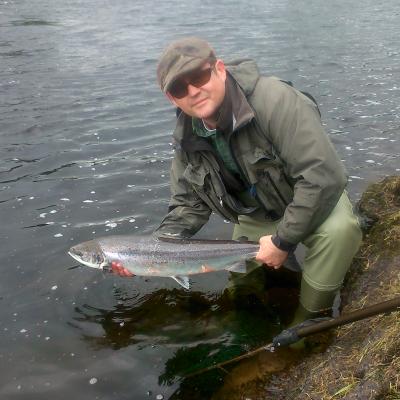 My top places to fish in Aberdeenshire