Happy Halloween! To commemorate the spookiest day of the year, here are some frightening tales from around Aberdeen and Aberdeenshire, featuring haunted buildings and castles, mysterious happenings and paranormal activity.

Here’s a castle that needs no introduction. Balmoral Castle is the Scottish home of the Royal Family but did you know that it is also said to have its own ghost? John Brown, a companion of Queen Victoria who became a close personal friend of the Queen following Prince Albert’s death, has been seen in the castle grounds and around the corridors wearing his kilt after his death. Both Queen Victoria and Queen Elizabeth II have reported seeing John Brown and feeling his presence. 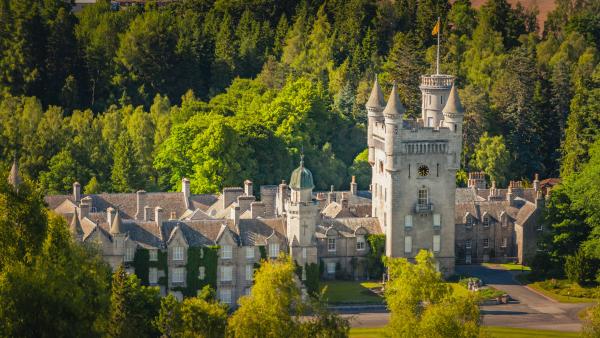 Braemar Castle is said to be haunted by a newlywed bride who woke early on the morning after her wedding night to find that her husband was nowhere in sight. Panicking, she concluded that her husband had deemed her an unsatisfactory lover and leapt to her death from the marital chamber window. It turns out that the groom had been on an early-morning hunting trip and was distraught to return to the castle to find that his new wife had died. It is said that the ghost appears when newlyweds are staying in the castle.

Well this doesn’t sound like the happily ever after that most of us would have in mind for a princess… Castle Fraser is said to be haunted by a princess who was murdered while she slept in the Green Room. As her bloodied body was dragged down the stairs of the round tower it stained them to such an extent that the staircase was covered with wooden panelling which can still be seen today. And don’t forget to say hi to Lady Blanche Drummond, who died of consumption in 1874, who is said to roam the grounds and staircases of the castle dressed in black.

Craigievar Castle might be a fairy-tale castle, but even fairy-tales can have an evil twist. This enchanting pink castle is said to be haunted by the ghost of a fiddler who fell into a well in the kitchen and drowned. The fiddler is said to appear only before members of the Forbes family. Another spirit said to haunt the castle is from Clan Gordon who was murdered by being pushed from one of the windows in the Blue Room. 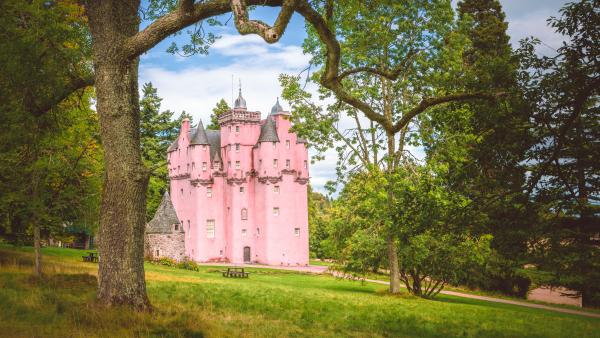 Crathes Castle is no stranger to paranormal activity. It is haunted by The Green Lady. Some say she was a servant girl who fell pregnant out of wedlock and fled the castle never to be seen again. Others believe a more sinister tale. In the 1800s workmen uncovered the skeletal remains of a woman and child beneath the hearthstone of the fireplace. The legend has even inspired some Nuart artwork on Union Row, Aberdeen.

Delgatie Castle is rumoured to be haunted by a young red-haired woman called Rohaise who lingers in one of the bedrooms and only appears when men stay there. It is thought that the spirit once defended the castle. In WWII a military unit abandoned the castle on barefoot as they were stalked by the spirit.

Drum Castle is a hotspot of supernatural activities so much so that in 2014 one of their resident ghosts was even captured on camera! Many people have report seeing the ghost of Alexander Irvine who died at just six years old. His haunting laughter is often heard echoing throughout the castle and it is reckoned that he returns there to play with his siblings.

Dunnottar Castle is one of the icons of Scotland and understandably it has brought countless kings, queens, noblemen, famous faces and even Hollywood to visit so are you really surprised to hear that ghosts can’t bear to leave it behind either? Many visitors report having seen a young woman in a green plaid (traditional) dress in the Bakery looking for her lost children before vanishing in a doorway by the Brewery. Other sightings include a young deer hound and a tall man dressed in military regalia staring out to sea. Some have even heard sounds of a meeting taking place in Benholm’s Lodges, but no one is there… 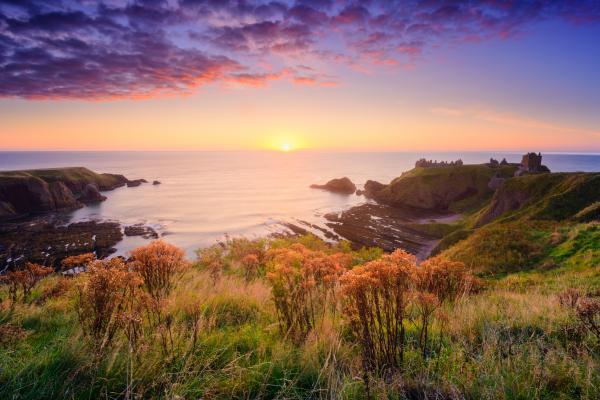 Fyvie Castle is often ranked amongst the most haunted castles in Britain and even appeared on the TV series ‘Most Haunted’. Three ghosts are said to haunt these halls – The Green Lady, The Grey Lady and a ghostly trumpeter.

The Green Lady has a particularly creepy tale. Legend has it that it is the ghost of Lilias Drummond who was starved to death by her husband for failing to provide a son and heir. On the wedding night of his second marriage (who also happened to be Lilias’ cousin - scandalous!), ghostly screams were heard outside the marital bedchamber and come morning her name was found to be freshly scratched into the exterior of the castle walls.

The second ghost is thought to be Lady Meldrum who resided in the castle in the 13th century and had her remains buried into the walls of the castle when she died. When the castle was renovated in the 1920s her remains were found inside a secret room and taken to a churchyard for a proper burial. Since then it is thought that she has appeared as The Grey Lady.

The third ghost is The Phantom Trumpeter who is said to have died of a broken heart. He is believed to appear dressed in tartan near the castle wall and is often approached by visitors thinking that he is a member of staff only for him to disappear before their eyes. The myth is that the trumpet sounds when death is near.

If that wasn’t enough the castle is cursed never to have a male heir live to maturity thanks to three ‘weeping stones’. Three stones and three ghosts – what a strange coincidence… 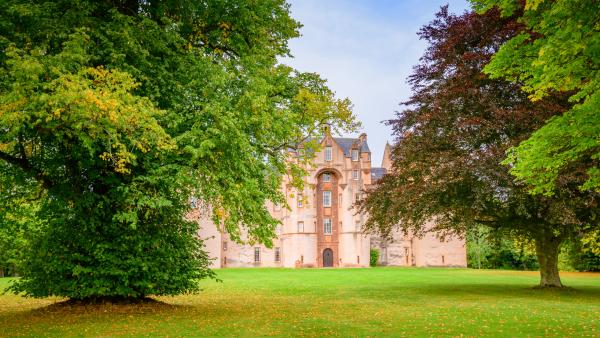 Haddo House is no stranger to the supernatural. This is a place where locked attic doors shake violently and spirits threaten staff and chase them through the corridors. One of Haddo House’s most famous residents is red-headed Lord Archibald Gordon, known as Archie, who died in a car accident in 1909. He is often seen talking to visitors dressed in his hunting tweeds.

The tragic tale of Laird John Leith III occurs on Christmas Day 1763. He met his untimely end during a drunken brawl in Aberdeen after a patron accused him of underhand dealings with the grain leaving Leith Hall. He was shot in the head and was brought home but died three days later on Christmas Day. Allegedly he now haunts Leith Hall, groaning over his injuries, wearing dark green trousers and a dirty white bandage wrapped around his head and covering his eyes.

Bars – Raise a glass to the ghosts

Ma Camerons is the oldest pub in Aberdeen so it’s no surprise that it will have a few ghost stories. Employees report to frequently feeling as though they are being watched and seeing the beer tap being turned on when no one is around. Then comes the story of the painter and decorator who heard knocks on the ceiling coming from a locked, empty room. He knocked three times on the ceiling in response and was answered with three more knocks from above. Understandably, he fled the pub in terror.

Similar to Ma Camerons, employees were used to beer taps being turned on by themselves but things started to become more harrowing at The Mooring’s Bar (now Krakatoa) as cloths and mop buckets began flying across the room after an old price list was moved. The activity caused the owners to call in paranormal investigators who during their search recorded a voice saying to “put the list back”. After the list was returned the activity stopped.

Call it a haunting or an absurd coincidence, when a woman who was a well-loved regular at the bar stopped coming, a polaroid photograph fell from the rafters of the bar before the owner. The photo was of the woman dating several years prior. When he fled the scene he was met by a policeman outside who informed him that the woman had died…

Ardoe House Hotel is a beautiful 19th century mansion set in 30 acres of tranquil countryside but for those looking for things that go bump in the night tranquillity isn’t quite on the cards. Haunted by The White Lady who lingers by a painting of the previous owner’s wife, Katherine Ogston who lived in the mansion from 1839.

There seems to be a trend starting with ghosts and the name Ogston doesn’t there? James Ogston is one of three ghosts rumoured to haunt Norwood Hall Hotel alongside his wife and his mistress . James is frequently spotted in the dining room by the log fire and his mistress is found in the main stairs. However, it is his wife who seems to be the most agitated. Some suspect that she is searching for her husband and his lover waiting to take her revenge.

Ben Macdui is the tallest mountain in the Cairngorm National Park and the second tallest mountain in Britain. Although slightly smaller than Ben Nevis, Ben Macdui is situated in much wilder terrain in the centre of the Cairngorms plateau. Ben Macdui is said to be haunted by the wraith-like Old Grey Man known in Scottish folklore as Am Fear Liath Mòr. Few have seen the creature, those who have describe it as an extremely tall hairy figure, standing over ten feet tall with olive skinned skin. The first recorded encounter was 1891 but wasn’t made public until almost 35 years later… Could it have been a cover up?

Tucked away behind the Museum of Scottish Lighthouses is a mysterious tower. The 8th Laird’s daughter was imprisoned in the upstairs in the tower and her lover was incarcerated below. When a storm drew in and flooded the bottom chamber drowning her lover she leapt to her death from the window. It is said that she appears before bad weather!

Built in 1906, His Majesty’s Theatre boasts its own personal ghost, Jake, the spirit of a former employee who tragically died in 1942 when struck in the head by a rapidly-spinning winch handle. He was 69 when he was killed, attempting to put the brake on a lift which was transporting circus horses to the lower floor. Jake manifests in various ways, particularly by cold spots in the passageway nicknamed “Lambeth Walk”. Although quiet since the refurbishment in 1999, people believe Jake keeps an eye on his colleagues still to this day. Some report to hear the clip-clop of hooves too. 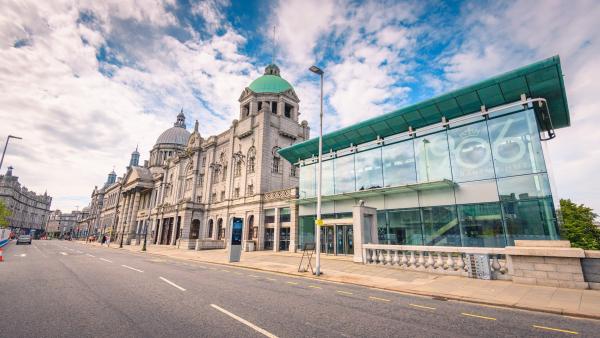 It should be no surprise that The Tolbooth Museum is haunted. During its many years of operation death was part of the day to day whether that was by execution, murder or by torture. It is thought to be one of the most haunted buildings in Scotland and even caught the eye of paranormal investigators including TV’s Most Haunted team. The Tolbooth ghosts have manifested in the form of unexplained noises including footsteps and keys rattling, a four-foot tall man wearing 1920’s attire and deep voices mumbling in visitor’s ears.

So, there's just some of the North-east's most haunted locations - why not explore some during the spooky season?